Single mom Shirley Young got the opportunity to speak with the President about her struggle to pay for her 16-year-old son Kendrill’s $60,000 scoliosis surgery, with Obama citing her situation in a speech later that day. 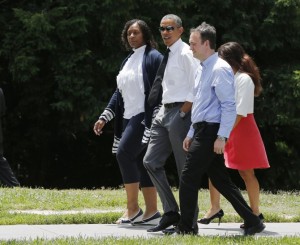 Photo Credit: Young (far left ) and other parents told the President about the challenges their families are dealing with.

WASHINGTON – Shirley Young, a nurse from the Bronx, was invited to lunch in the capital Monday, but she had no idea President Obama would be sitting next to her in Chipotle.

A single mother who works at the Isabella Geriatric Center in Washington Heights, Young was invited to a White House-hosted summit on working families after she spoke up at a prior event in New York about her struggle to pay for her son’s scoliosis surgery.