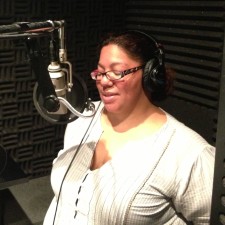 For the past few weeks, 1199SEIU has been taking over the radio airwaves to educate our patients and the public about how CEOs are threatening the quality of care and jobs for New Yorkers. Now, 1199 member Anna Perez, a Licensed Practical Nurse at Carmel Richmond nursing home on Staten Island, has recorded a Spanish version of our radio ad which will launch on the top Spanish language stations later this week.

We Care For New York

On June 18th, 2014 thousands of caregivers at 100 facilities throughout New York sent a powerful message to management…. We Are United, For Our Patients, Our Families, & Our Future! 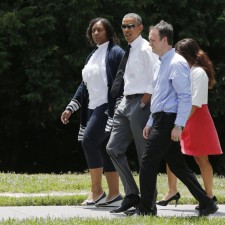 WASHINGTON – Shirley Young, a nurse from the Bronx, was invited to lunch in the capital Monday, but she had no idea President Obama would be sitting next to her in Chipotle.

A single mother who works at the Isabella Geriatric Center in Washington Heights, Young was invited to a White House-hosted summit on working families after she spoke up at a prior event in New York about her struggle to pay for her son’s scoliosis surgery. 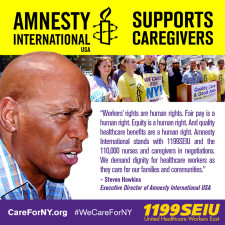 NY Daily News: Amnesty International Jumping In On Side Of 1199SEIU Workers In Health Coverage Tussle

Human rights group Amnesty International is wading into the a massive hospital-worker union’s fight to maintain their own free health coverage.

As 1199SEIU on Thursday returned to contract talks with the League of Voluntary Hospitals and Homes of New York employer group, Amnesty Executive Director Steven Hawkins on Thursday vowed to mobilize his 3 million members to back the workers. 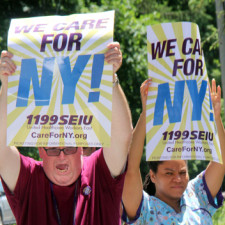 The employees, represented by the union, have been in master contract negotiations with the League of Voluntary Hospitals and Homes, the employer group representing most private hospitals, nursing homes and clinics in the area.

Thousands Of Nurses And Healthcare Workers At 100 Facilities Protest For Quality Care And Good Jobs For All New Yorkers!